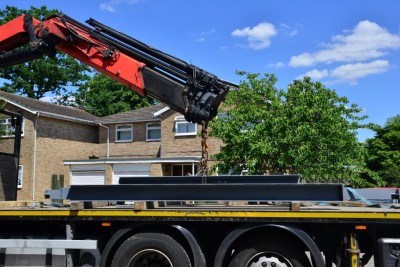 The method of producing an I-beam, as rolled from a single piece of steel, was patented by Alphonse Halbou of the company Forges de la Providence in 1849.

Bethlehem Steel was a leading supplier of rolled structural steel of various cross-sections in American bridge and skyscraper work of the mid-twentieth century. Today, rolled cross-sections have been partially displaced in such work by fabricated cross-sections.

There are two standard I-beam forms:

I-beams are commonly made of structural steel but may also be formed from aluminium or other materials. A common type of I-beam is the rolled steel joist (RSJ)—sometimes incorrectly rendered as reinforced steel joist. British and European standards also specify Universal Beams (UBs) and Universal Columns (UCs). These sections have parallel flanges, as opposed to the varying thickness of RSJ flanges that are seldom now rolled in the UK. Parallel flanges are easier to connect to and do away with the need for tapering washers. UCs have equal or near-equal width and depth and are more suited to being oriented vertically to carry axial load such as columns in multi-storey construction, while UBs are significantly deeper than they are wide are more suited to carrying bending load such as beam elements in floors.

I-beams are widely used in the construction industry and are available in a variety of standard sizes. Tables are available to allow easy selection of a suitable steel I-beam size for a given applied load. I-beams may be used both as beams and as columns.

I-beams may be used both on their own, or acting compositely with another material, typically concrete. Design is governed by the following:

If you would like any advice or wish to discuss an order, please contact BMS Steels, Emsworth, Hampshire on 01243 379568 or email sales@bms-metalworks.co.uk

For information on our Plumbing and Heating services, please visit  https://bms-plumbing.co.uk